Kamloops sits in a physiographic region of BC called the Interior Plateau, which lies immediately to the east of the Coast Mountains. These mountains run roughly southeast-to-northwest and form a barrier to the dominant, moist air-flow from the Pacific Ocean, and result in a climate that is much drier and more continental than that of the coastal areas.

This happens because when the air is forced to rise over the mountains as it travels east, it cools and much of its moisture falls as precipitation on the windward slopes. The now drier air then warms again as it flows downhill on the leeward side, and the clouds dissipate. This region, where the precipitation is much less, is called a rain shadow.

Rain-shadow climates are not just drier than those ‘on the other side of the mountain’, they are also warmer. In fact, the southern interior, and in particular those narrow fingers of land centered on the major river valleys there, experience hotter and drier summers than any other areas in the province. Kamloops has the hottest summers of any Canadian city, and only Whitehorse in the Yukon is drier.

These narrow river valleys make up a small climactic zone called the Bunchgrass Zone, which covers less than one percent of the total area of BC and is characterized by open grasslands where the climate is generally hostile to tree growth. But the very conditions that prevent the growth of forests are a blessing to hikers.

Kamloops lies in an area that is uniquely favorable for hiking. The Thompson River valley is flanked on both sides by lines of high hills, some with stunning perpendicular cliffs, from which sweeping vistas spread in all directions. The views to the north from the line of cliffs in the Buse lake Protected Area, and to the south from the summit of Mount Mara, are among the finest in the southern interior, and because of our climate these places can be reached year-round. The open terrain in the valley also provides excellent views without having to go high to get them, and the semi-arid climate has allowed geological features such as hoodoos to form which cannot exist anywhere else.

Hiking in a rain shadow means that where you are it is, on average, drier, sunnier and warmer than it is elsewhere, and you will probably have a beautiful view from almost anywhere.

When lava cools into geometric columns…

The Kamloops area is hiking country. Much of it is open terrain with large hills, providing sweeping vistas from many vantage points, but there is much more to see than just the big, post-card views. We live in an area with a long volcanic history and the evidence of that violent, hostile past remains on bold display throughout the region to this day.

Northwest of the city lies the Lac du Bois Grasslands Protected Area, a large (15712 hectare) tract of public land made up largely of grassland and (other) open, rolling countryside. But it also has spectacular cliffs and canyons which display a wide variety of rock formations (and features), and almost all of this fascinating geology is composed of one rock type – basalt.

Basalt is (an igneous) volcanic rock (which is) formed when lava erupts onto the surface, then cools rapidly (to forming a hard, dark-coloured rock with a fine-grained mineral texture).

When the lava cools it contracts and its surface will often crack. Sometimes the contraction occurs around evenly-spaced centers, and when this happens a hexagonal fracture pattern will develop. (The fracture pattern forms at the exposed surface of the lava and propagates downward into it as the flow cools, ) forming long geometric columns. This phenomenon is called columnar jointing.

The best example of basaltic columnar jointing in our area is located on the south side of the Dew Drop Flats, directly north of Battle Bluff. To reach it, follow the Tranquille-Criss Creek Road to the switch-back turn and continue straight on Frederick Road to the Battle Bluff trailhead. Follow the Battle Bluff Trail to the bottom of the hill where the final ascent begins, then turn east up the wooded valley as it rises gently between the two hills. The basalt columns appear on the north side as a nearly vertical, 25- meter-high cliff (atop a talus slope, forming the lower section of a multi-tiered hill) known locally as Bighorn Bluff and referred to by my wife as French Fry Hill. 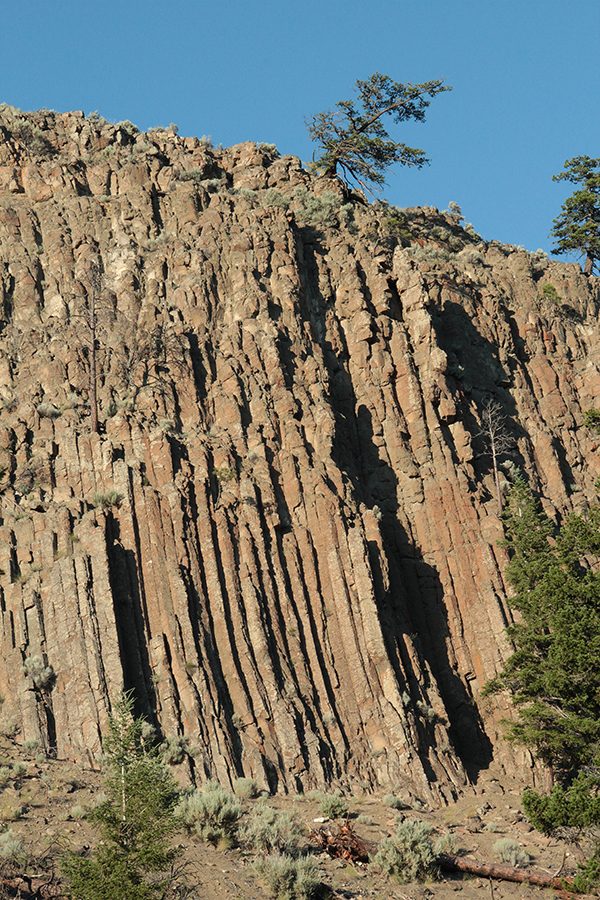 Castle Butte is an imposing precipice that towers over the Dew Drop Flats north of Kamloops Lake. It projects forward from the line of cliffs that make up the Red Plateau Escarpment, and was formed by a succession of lava flows from an ancient volcanic cone which once existed a short distance to the west.

The flows have given the south face of Castle Butte a layered appearance, and at the top of one of these layers is a natural rock arch. The location of this arch is not well known despite its considerable size, as it can’t be easily seen from the flats below and is not visible at all from above.

The structure has an elongated, oval-shaped entrance about 12 feet wide and 35 feet high, and an upward-curving top which is generally wider than it is thick, giving it a roof-like appearance. Its other opening is much smaller, and is situated at the top of the 25-foot-high nearly-vertical back wall.

There are several different types of arches, each named for the manner in which they are thought to have formed. This one may be a Cave Natural Arch, formed when part of the roof of a cave collapses leaving a portion suspended by the walls of the cave. When
I come to this arch I do feel as if I am actually inside a cave, and I always experience a sense of shelter and protection when there.

On geologic time scales, all arches are short-lived. The rock they are composed of may be very old, but they are not. Any arches in our area only came into existence after the retreat of the glaciers less than 9,000 years ago, and all will one day succumb to the same erosional forces that created them.

To see the Castle Butte Natural Rock Arch for yourself, follow the Tranquille-Criss Creek to the Frederick Road intersection, then follow Frederick Road for 3.3 km. Castle Butte is in plain view to the north. Follow a rough grade west for 0.55 km, then head north on foot toward a large hill on the east side of the butte – the arch is at the top of this hill. There is no actual trail to follow, but a shallow ravine leads straight toward it, and the final section requires a scramble up the side of a chute. It takes effort to get there, but the place is well worth visiting – big arches are rare in the world.

In this view the arch is about 20 feet straight up.